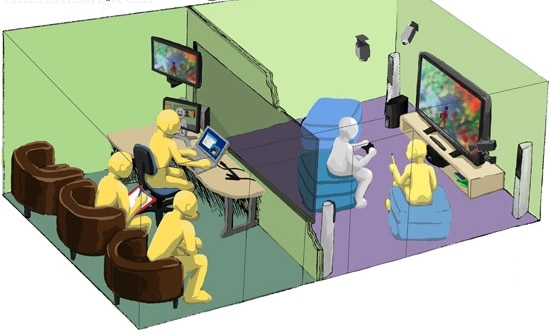 The idea for this mini case study came from a wonderful blog post provided to us by a client. The original article is linked here.

One of our clients really wanted to have a dedicated usability room. While they had the space, there just wasn’t a budget earmarked for building out a state of the art lab. Fortunately, with a little help from the guys at Pivotal Labs in the article linked above, we found some inspiration on a DIY setup. This is the basic outline we followed. All relevant components are linked in the post below.

We made some slight modifications to this whole setup in that we did the following:

We used an older MacBook Pro that someone had mistakenly purchased with 8gb of RAM and only 128Gb SSD and that was really of no use to any designer or project manager. We set that up with a keyboard, mouse and monitor so that it would have a more authentic desktop experience. We closed the laptop and hid it behind the monitor. We installed a nest camera inside of an articulating lamp so that we could unobstrusively get a close picture of what the user was doing on the mobile device. It helps that the outdoor nest cameras come equipped with magnet mounting. A second nest camera was wall mounted to get a macro view of the room itself.

The observation Mac Mini was an old OS X server machine that had been sitting on a shelf since the move to the cloud. We wiped and repurposed it with the Reflector app to record the iPod touch usage. We chose to only use two monitors because in this case, 27 inch monitors had more than enough space. One was connected via HDMI and the other via HDMI to miniDisplay. One monitor had both nest camera streams showing on it while the other monitor was running the reflector app and Slack for communication.

Repurposing equipment that wasn’t being used, we built a viable usability lab with less than $800 of expenses for equipment and software. The lead UX designer summarized it pretty well: “This makes me so happy.”